It must suck to be them. One almost (almost) feels sorry for those who can't quite come to terms with the telepromptered messiah's amateurishness and ineptitude:


San Jose, California (CNN) -- Howard Dean, the former Vermont governor and Democratic firebrand, stood behind a podium at the San Jose Convention Center and neatly summed up the current zeitgeist of the left.

"Is the president perfect?" Dean asked a buzzing audience of left-leaning bloggers, political activists and organizers on Thursday evening. "No. But it sure is better than having Bain Capital, I mean Mitt Romney, in there."

Dean's growling joke crystallized the prevailing liberal sentiment about President Barack Obama as the curtain rose on Netroots Nation, the annual progressive conference started in 2006 by the creators of the Daily Kos, a popular left-leaning blog and founding member of an online grass-roots movement that eventually helped lift Obama into the White House. 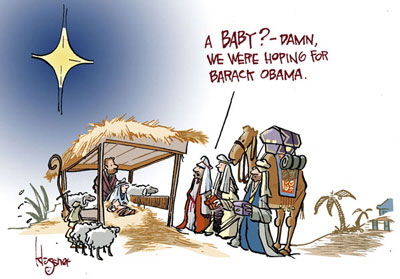 Posted by scaramouche at 7:37 AM