We're seriously thinking about getting one of these: 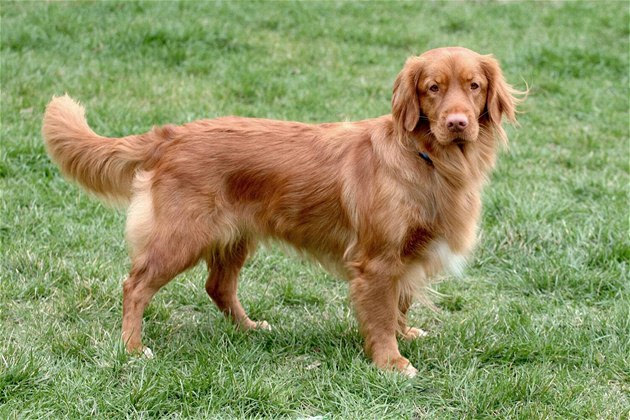 Goldens make great pets. They are unbelievably friendly, affectionate, and eager to please. The only downside is that, except for a deep, big-dog bark, they must be the world's sorriest watchdogs; they love _everybody_, and, like Will Rogers, never met a man they didn't like.

Their friendliness _can_ reach obnoxious levels at time: We actually had to post "Beware of dog" signs on our fence gates when our recently late Golden, Tyke, was young and rambunctious, not because he was in the least likely to attack anyone, but because, as soon as he heard the click of the gate latch, he was so happy for the prospective company that he would come bounding at top speed around the corner of the house to greet his new playmate; as he tipped the scales at a bit over 100#, he could be a frightening sight to someone unfamiliar with Goldens' temperament. We didn't want anyone to hurt himself trying to get away from him.

Our first dog was a golden--and he was everything you mentioned. Our second dog--the one who just died--was a flat coated retriever, and, if you can believe it, even more affectionate than our first dog. (Flatties are extremely attached to their people, much more so than goldens.) Our next dog, the one pictured above, is not a golden. It's the smallest type of retriever, and it has the longest name--a Nova Scotia Duck Tolling Retriever (or "toller," for short).

I had never heard or read fof the Nova Scotia Duck Tolling Retriever until just now. They look remarkably like Goldens, judging by the photo you posted; I would have bet money that is what the one pictured was.

They're smaller than goldens--and the pups are awfully cute: http://www.myidealdog.com/wp-content/uploads/2010/06/Happy-Nova-Scotia-Duck-Tolling-Retriever-puppy.jpg