So far ISIS is running rings around the infidels:

A typical interaction between a "lone wolf" and a recruiter might go as follows: A young man sees professional-looking propaganda videos produced by the Islamic State. He watches a few of the videos and feels that he has something in common with the men in the video. He then might reach out to the person who posted the video, either on Twitter or Facebook, and engage with him. Eventually, a series of conversations online might encourage the "lone wolf" to travel to Europe, with instructions to find a particular person who might help him make his way into Syria.

While some people are directly encouraged to come to Syria via social-media conversations, Mr. Berger has monitored other exchanges in which a person has tweeted that he has arrived in Turkey, a signal that he needs an extremist to assist him with travel over the border.

The Islamic State produces high-resolution videos and hashtag campaigns. It even has an app that can automatically tweet the organization's content on users' accounts.

"They have a very good Twitter army; they have social-media savvy," said Daveed Gartenstein-Ross, a senior fellow at the Foundation for the Defense of Democracies.

The group's battlefield success makes Islamic State content all the more appealing, finding would-be recruits where they spend most of their time, on the Internet.

"It's like attracting the moth to the light," Mr. Shaikh said.

As for the U.S. government's counter-jihad initiatives on social media--the lights are out and nobody's biting:

The U.S. conducts its own counterpropaganda campaign on social media through the State Department's Center for Strategic Counterterrorism Communications, although it is unclear how persuasive the campaign is.

The targets are "fence-sitters," mostly disaffected teens and people in their 20s and 30s. "Those people don't tend to listen to the U.S. government," said Aki Peritz, a former CIA counterterrorism analyst...

No kidding. What "lone wolf" wants to get the scoop on holy war from Great Satan? 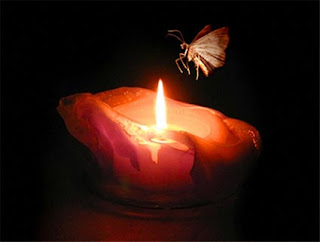 Posted by scaramouche at 6:58 AM