Zsuzsanna and I returned to Stornoway and disconsolately packed up our things. I remembered a photograph I’d seen of men in overalls carting belongings into a moving van at the back of 10 Downing Street after Margaret Thatcher defeated James Callaghan in 1979.

The arrival of the moving van is as momentous a symbol of the sovereignty of the people as the moment when a leader takes the oath of office. Now the moving vans were at our back door. The people had told us to pack our bags.

In an emptying house that had once felt like home, I pulled my books off the library shelves as the portrait of Laurier, our greatest prime minister, seemed to follow me with its eyes. Every leader of the party but two had become prime minister. Now I had become the third leader to fail.
The day before I’d had an airplane, a security detail, a staff of 100, a car and driver, a chef and housekeeper to welcome us home, and, most valuable of all, a political future. The day after, that future had vanished. I was unemployed and five and half months short of eligibility for the pension that usually goes with six years of service as an MP...

Sucks to be him, eh? No wonder the Liberals opted to go with hunkalicious but intellectually vacant Justin Trudeau instead of with another charisma-challenged brainiac like Iggy. 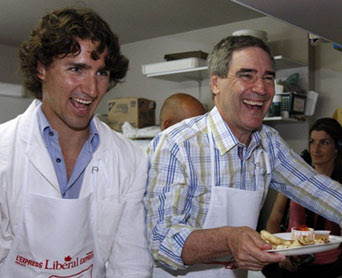 Posted by scaramouche at 2:29 PM