That's the fantasy, at least. The reality is that it's about as "moderate" as a rattle snake. 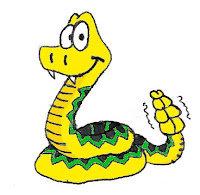 Posted by scaramouche at 8:52 AM

The title of Daniel Moynihan's famous _American Scholar_ essay, "Defining Deviancy Down," though originally an allusion to the decline in civic virtues in the more . . . "progressive" jurisdictions of the U. S., applies here. Over the past half century, we have been repeatedly told by our political leaders that dealing with this or that terrorist group would be "absolutely unacceptable" by our political leaders, only to have the Leftist intelligentsia and their MSM running dogs undermine the resolve of the political classes, so that the murderously deviant--think Fatah!--becomes the respectable opposition.

The same process is well underway with Hamas and Hezbollah; and, though one can hardly imagine a more morally deviant entity than these quasi-Nazi, genocidal advocates of a _Judenrein_ Palestine, no doubt one shall spring up as soon as they finish being "mainstreamed."