Ausma Malik: Victim of Malicious "Islamophobia" or Hoist on Her Own Zionhass Petard?

Ausma Malik, who is running for election as school board trustee, says she's been the victim of an "Islamophobic" smear campaign:

TDSB Ward 10 trustee candidate Ausma Malik appears to be the target of an anonymous co-ordinated attack. In addition to being heckled at a candidates’ debate, her campaign office says that thousands of flyers were distributed throughout the ward this week which, among other things, accuse Malik of being a supporter of the Toronto 18 terrorist cell and a proponent of Sharia law. One flyer even has a photo of Malik superimposed over a yellow and green Hezbollah flag.

“The accusations are incredibly mean-spirited and they’re lies,” Malik says. “I’m doing this because I believe in public education, I believe in our community, and I believe that an inclusive, equitable and progressive public education system is possible — and especially in light of this, absolutely necessary.”

Re the accusations being mean-spirited and unfounded, I would direct your attention to this Sept. 27th article by Sue-Ann Levy
Does it constitute "lies" and a "smear" to point this out? How so? 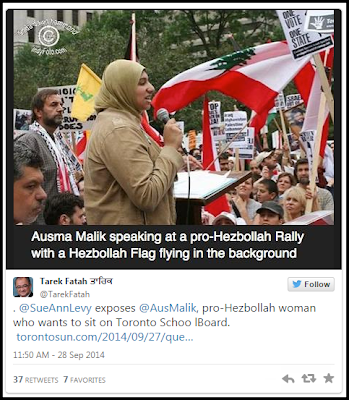 Posted by scaramouche at 5:02 PM