What was that you said, Golda? "Peace will come when the Arabs love their children more than they hate us"? How right you were, sister!:


Less than a week after the declaration of a ceasefire between Israel and Hamas, Operation Pillar of Defense has already left its mark on the people of Gaza, in a rather unexpected way.

Some parents from the Strip have decided to name their newborn babies after operation-affiliated icons – from assassinated Hamas commanders to long-range missiles fired at Israel.

Muhammad al-Shafi'i Abu Nassat named his son, who was born Friday, after the Fajr missile. Naming his baby Fajr, Abu Nassat told Gaza media, was his way of expressing his gratitude to Iran, which was responsible for supplying Gaza with rockets that, according to Abu Nassat "struck the enemy for eight days."...

Aw! How adorable is that? 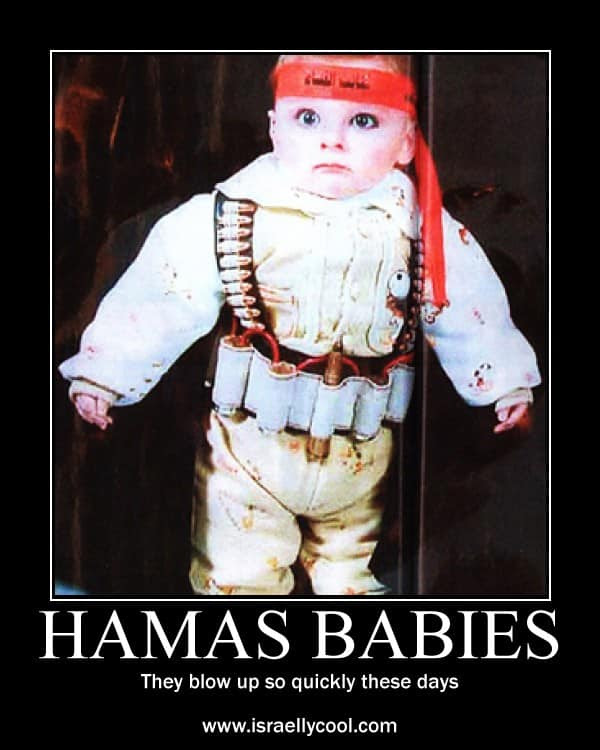 Posted by scaramouche at 4:42 PM

Golda Meir's famous quote contains a kernel of optimism in its grammar: the phrasing implies the hope that an eventual evolution in the thinking of the _Arabs_--note how she refers to them in ethnic, not religious terms. Having passed away in 1978, she could not, of course, have foreseen the rise of Islamic fundamentalism, which has turned a clash of nations into one of religions (certainly from the standpoint of the Moslems). That has undermined the implied optimism in the quote, as religious fanatics are less amenable to rational negotiation than nationalist ones. I have the feeling that Mrs. Meir would not be quite as optimistic, even in an oblique way, had she lived to see the resurgence of Islamism.