Up Is Down, Over is Under, and, Oh, Yeah, the Niqab "Is Liberal and Progressive"

And anyone who has a problem with that line of thinking must be a big, fat "Islamophobe." 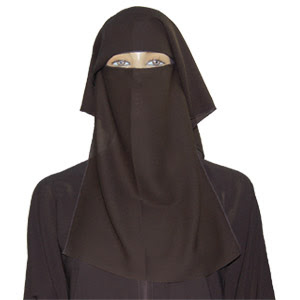 Posted by scaramouche at 7:24 AM

The Grand Imam of Al-Azhar, head of Al-Azhar, the highest seat of learning in the Sunni world.“The niqab is a tradition and has nothing to do with Islam,” said Sheikh Tantawi, vowing to ban it in Al-Azhar schools.

After the girl complied he insisted she should not wear it any more.“I tell you again that the niqab has nothing to do with Islam and it is only a mere custom.

I understand the religion better than you and your parents.”

The Grand Imam of Al-Azhar imam vowed to issue a ban against the face-veil in all schools linked to Al-Azhar.“Source: http://ahmadiyyatimes.blogspot.com/2011/02/egypt-al-azhar-imam-offended-orders.html