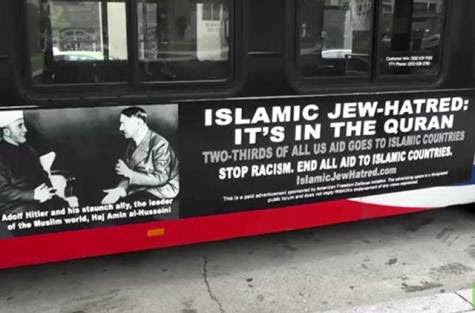 and, right on schedule, all hell has broken loose. The head of CAIR, for example, has taken it upon himself to "explain" how that picture came to be:


As for the picture in the ad of Adolf Hitler sitting next to the late Palestinian religious and revolutionary leader Haj Ameen Al Husseini, Ghuneim commented since “everybody is against Nazism, they are trying to relate Islam to Nazism,”.

Al Husseini, who was the Mufti of Palestine under the British mandate, was one of the main leaders in the Palestinian revolution in the thirties of the last century. Al Husseini was sentenced to death by the British colonial authorities, but managed to escape and travelled to Germany in 1939.

“Al Husseini was not a supporter to Nazism. It (Germany) was the only place he could resort to escaping the British pursuit,” he said...

Well, that's one way to look at it.

The other way is to tell the truth. But then that would conflict with that "Islam-is-peaceful/Palestinians-are-victims-of-Joooish-occupiers" narrative.

To bolster its ahistorical fabrications, CAIR turned to a mealy-mouthed useful Jewish idiot (of which, sadly, there are plenty, especially in the U.S.):


Rabbi Rachel Gartner, board member of the T’ruah: The Rabbinic Call for Human Rights posted a response to the provocative bus ad.

“As an American, I insist on the right to free speech, even when I deplore the message. As a rabbi, I insist on the responsibility to speak out against hateful speech, particularly when it comes from one of our own,” she said in her article posted on the Huffington Post website.

“Ms. Geller, here’s what I have to say. If you have a political statement to make: first , check that it’s not actually hate speech in political garb. Secondly. Keep the Quran out of it. Unless you also want to reference suras like this one (there are many): “Indeed, I, God, sent down the Torah, in which was guidance and light, and the prophets judged by it, as did the rabbis and scholars.” (Quran 5:44). Thirdly, be righteous in the way you engage religious texts — others’ and our own — in all contexts.”

So when those holy warriors, inspired by the pertinent suras and hell-bent on beheading and/or blowing up as many infidels as possible, show up screaming "Allahu Akbar!," make sure you politely and righteously put their actions "in all contexts."

Of course, that might be a tad hard to do since you'll be, in all contexts, dead.

Upon seeing the useful idiots depicted in CAIR's bus ad, that T.S. Eliot observation--"Humankind cannot bear very much reality"--once again proves to be invaluable.
Posted by scaramouche at 7:24 AM