It's part and parcel of Justin Trudeau's ill-considered promise to enact every single recommendation of the "Truth and Reconciliation Commision," apparently:

In promising to enact all of the recommendations of the Truth and Reconciliation Commission, the federal Liberals have agreed to remove a section of law that allows parents to spank their kids without fear of prosecution.

Groups that oppose corporal punishment of children have spent many years urging successive governments in Ottawa to repeal Section 43 of the Criminal Code that permits parents and teachers to use reasonable force to correct the behaviour of youngsters in their care.

The Truth and Reconciliation Commission, which heard thousands of tales of physical abuse inside Indian residential schools, said in its final report that “corporal punishment is a relic of a discredited past and has no place in Canadian schools or homes.” The repeal of Section 43 was No. 6 on a list of 94 “calls to action” included in the report, which was made public last week.

When asked if Prime Minister Justin Trudeau’s promise to act on every TRC recommendation meant repealing the so-called spanking law, a spokesman for Justice Minister Jody Wilson-Raybould would only say the government remains committed to implementing all of the commission’s calls to action.

In 2004, the Supreme Court of Canada ruled that physical force was acceptable within certain bounds – it cannot be used on children under the age of 2, it cannot involve implements such as a paddle or a belt and blows to a child’s head are not allowed. Teachers and faith-based groups praised the decision, saying the people who are responsible for raising children must have the leeway to decide when moderate physical discipline is required.

A move to open parents and teachers who spank children to the possibility of criminal charges is unlikely to pass through Parliament unopposed...

While I certainly don't believe in harming a child, I don't think it's in society's best interest for the state to intervene here. The state has no business deciding for a parent whether or not an occasional smack on a child's backside is indicated. Moreover, it is counterproductive, to say the least, to transform the disciplinary act of an otherwise loving parent into something criminal.

Sorry, Justin, but the whole think seems bonkers to me. 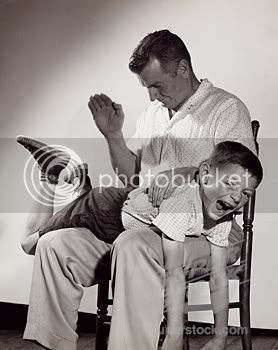 Posted by scaramouche at 7:08 AM