The Zion-Loathers' Biggest Problem: They Suffer from an Irony Deficiency

Case in point, a Palestinian who sits in Israel's Knesset as an elected member and head of an Arab political party who is coming to tell us about the lack of democracy/plethora of apartheid in Israel.

Call me kooky, but I'm pretty sure that black political leaders in apartheid-era South Africa sat in jail, not in parliament (right, Nelson?). Also, how many Jewish elected officials who head up their own Jewish parties have a seat in say, Egypt's parliament, and do you think Egypt would allow such an individual (had he actually existed) to travel at will and spew falsehoods about Egypt?

Rather puts things in perspective, no? 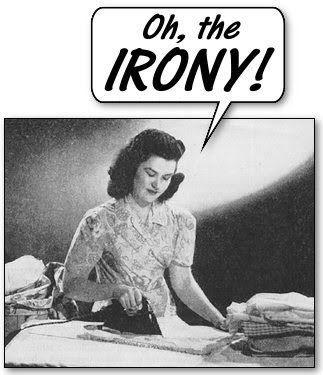 Posted by scaramouche at 1:00 PM

It always amazes me that those who defend Israel today, fell for the propaganda against South Africa and the anointed Nelson Mandela during Apartheid. In case you missed it, Mandela penned a book called: "How to be a good communist". Mandela was in prison not because he was a black activist, he was in prison because he plotted to blow up innocent people. He had enough arms and bombs in his possession to destroy Johannesburg. He was a TERRORIST. In prison he signed off on the Church Street bombing where another 19 innocent people on the street were blown to pieces. There were more blacks killed in that bombing than whites. Today the ANC has proven what we all knew back then. They weren't about liberating their people - they were after the riches of the country. Their black people live worse today than when whites controlled the country. So please spare me your virtuosity and stupidity, your naivity and gullibility. You are just as stupid as those who today are trying to bring down Israel as they did South Africa. Or haven't you noticed who SA is in bed with today? Clue: BRIC. And by the way, the ONLY country with guts and who stood by SA during Apartheid was Israel. They knew why we had the policy as they were living the same nightmare we were. Apartheid was there because whites were sick and tired of being raped, tortured, looted, pillaged and murdered by blacks who can never be cultured or civilised. As is proved today with one of the highest murder rates in the world and the HIGHEST rape stats. TIP: Do some open-eyed research before you speak about things you clearly know nothing about.