You're a Mean One, Mr. Grouch

It's that time of year again: 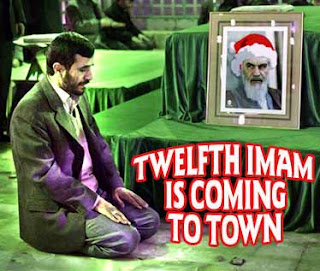 Every Jew down in Jew-ville liked living a lot.
But the Grouch who lived just east of Jew-ville did not.
He hated the Jews, the whole Jew-ish entity.
He longed to expunge the Jew-ish identity.
Why?
It could be because he was warped like Khomeini,
And, as for his scruples, he hadn’t goteini.
But I think—and I’m certain I’m on the right track—
It’s he thought that his Mahdi was soon coming back.
But whatever the reason that one cares to use,
He stood there in Tehran, hating the Jews.
Staring down from his podium, a smirk on his face,
He announced he had plans for the whole Jewish "race".
For, even though he contended the Shoah's a fraud,
He longed for another, for the sake of his God.
“They have no right to be!” he snarled with a glare
“They have stolen the land from those who were there!”
Then he danced a brief jig, saying, “Aye, that's the rub--
It's time that we Shias joined the nuclear club.”
For,
Tomorrow, he knew
All the UN kowtowers
Would dicker and dally.
And do nothing to halt all the nuclear showers.
And then! Oh, the cloud! Oh, the cloud!
Oh, the great mushroom cloud.
That’s the thing the Grouch longed for!
The CLOUD! CLOUD! CLOUD! CLOUD!
Then the Jews, young and old, would all sizzle and glow.
And they’d go! And they’d go!
And they’d GO! GO! GO!
And then he would finally be able to boast,
That because of the Grouch, the Jews were all toast.
And THEN
The occluded imam’s long occult-like occlusion
Would be more than collective religious delusion.
The Mahdi’d return once the Jews were dispatched,
And they'd get down to business so long ago hatched.
They’d rule! Yes, they’d rule!
Oh, they’d RULE! RULE! RULE! RULE!
And, in a thrilling redress of historic unfairness
The world would wake up to a brand new awareness
That Shias were, fittingly, top of the heap.
And all non-believers would sleep the Big Sleep.
And then…
The Grouch got an idea!
A wicked idea!
The Grouch GOT A DELICIOUSLY WICKED IDEA!
“I know just what to do,” said the Grouch, who was very ambitious.
And he made a quick call to his terror militias.
And he coaxed and he coo’d, “Please send lots of nice missiles.”
Then he sat down and dashed off some pithy epistles:
“Dear Barack, Dear David, Dear Infidel Leaders,
Here is your choice—submit or be bleeders.”
But did the Grouch stop at that?
No! He packed a valise
And raced off to the UN, there to speak his whole peace.
And he summoned his pit bull, Hu Chavez, to his mission,
The plan: first berate; then, cut bait and go fission.
SO
He arrived at the UN,
One of his favourite fora,
For ‘twas there
He’d espied his bright glowing green aura.
Then the Grouch shouted, “Boo!”
And the gathered grew pale.
And the Grouch told a wicked, duplicitous tale:
“I don’t want to kill Jews.
I mean them no harm.
So there’s no need to raise any suddden alarm.
Why, it’s just that my oil has depleted a bit
And I'm pitchin' enrichin' so my buildings stay lit.”
Then he slithered and smarmed and grinned a great grin.
As he thought of which countries would fall for his spin:
France! And Great Britain! Holland! And Spain!
The U.S.! Belgium! Norway! Bahrain!
Then he secretly handed himself a high-five
Knowing soon not a Jew would remain who's alive.
So he raced back to Tehran, full of bluster and thunder,
And the weak appeasers
Were left struck dumb with wonder.
He’d received a reception due a king debonair
Not the kind for a wannabe genocidaire.
Then he preened like a peacock with a glorious tail.
“And NOW!” said the Grouch, “I KNOW I can’t fail.”
And in no time at all, another secret enricher was up and running
To enrich more uranium—the amount would be stunning!
But, just then, from on high, the Grouch heard a strange hiss.
A strange Jew-ish hiss,
And he suddenly realized, “Something’s amiss.”
For up in the sky was a shiny Jew fighter
Which made the Grouch shriek,
“You bloody Jew blighter!
You’ll never, ever uncover my arsenal.
You’re all going to die—nothing parsenal.”
But we all know the Jews are so smart and so slick
And they’d sized up  the Grouch, and were wise to his trick.
“Why, don’t worry, dear Grouch, we aren’t here for your nukes.
We’ve come to get rid of your kookiest kooks.
So we’re taking Khamenei and his sock-thingy--you,
And here’s what we’re thinking we’re going to do.
First, we’ve hired a deprogrammer, to divest you of hate.
Next, we’re shipping you  States-side, before it’s too late
Where you’ll hook up with and get help from some real holy rollers,
And become Pentecostals, from your toes to your molars.
Then, once you've converted
We’re shipping you back,
And your by-the-book brethren will be on the attack
Because, as apostates, you’ll have no right to live.
(Thus saith sharia, which, as you know, has no ‘give’).”
So that’s what they did. The Jews stole them away,
And forced them to stay in the U.S. of A.
Where they were deprogramed
And divested of hate.
They rocked and they ranted. They spoke in strange tongues.

And at a quarter past dawn,
All the Shias still a-bed,
All the Jews still a-snooze.
They returned the Grouch and Khamenei—such an elegant ruse!
The devout were all stunned. They sputtered! They wailed!
And captured the apostates straight away, who were jailed.
Then, lickety-split, they chopped off their heads.
And the Grouch and Khamenei--hurray!--were both dead…
And what happened then…?
Well…in Jew-ville they say
That the mem’ry of the Grouch has just withered away.
And the terror militias, with no more of those missiles,
Have dropped all the Jew-hate and pen peaceful epistles.
And the Jews—they no longer give anyone pause.
And if you believe that…
You probably believe there’s a Santa Claus!
Posted by scaramouche at 8:15 AM