When you witness a rally held on the grounds of the Ontario legislature--a Seethe-a-thon invented by the Ayatollah Khomeini to cast aspersions on the world's one and only Jewish state--and when you hear calls for Israel, a "cancer," a "parasitical" entity, to be "dismantled" interspersed with shouts of "Allahu Akbar," you understand to the core of your being that Zionhass is the latest manifestation--mutation--of Jew-hate: the Jew-hate of our time. And yet it isn't at all clear that Jews understand that. Here, for example, is former CJC chief Keith Landy telling the Toronto Star how miffed he is that the Ceej has been superseded by a new, overarching Canadian organization for Jewish advocacy. (The Ceej's most recent former chief, Bernie Farber, declined to comment because he said he was running for political office and didn't want to alienate potential Jewish voters):


Landy agreed that, after 1993 and the Oslo Accords, both the Jewish community and Israel had become “complacent,” believing that anti-Semitism might finally be on the wane.

But he said it still made sense for the CJC to deal with domestic Canadian issues while the Canada-Israel Committee handled events affecting the Middle East.

When a Canadian synagogue gets sprayed with graffiti, “it’s something that affects the community directly here in Canada,” said Landy. “There needs to be a voice that speaks for local issues and the local community without tying it to issues related to Israel.”

Actually, Keith, as these Queen's Park Seethe-a-thon demonstrates, these days it all relates to Israel.

Who do you think is scrawling "Islam will rule" on local Jewish property--Nazis? 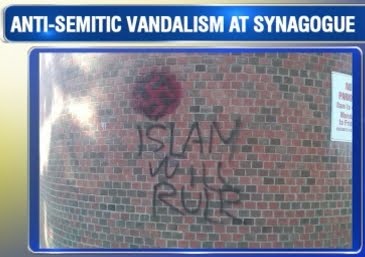 Update: Here's BCF's footage of daffy Zaffy Bangar at the Seethe-a-thon. But don't worry--it isn't "hate" because Zaffy assures us he loves Jews in general and loathes Zionists in particular--and only because they stole the Palestinians' land and thus have no right to be sovereign over it. (Can't you feel the love? Doesn't it make you feel all sick to your stomach warm and fuzzy inside?)
Posted by scaramouche at 8:54 AM

"[Keith Landy] said the CJC, founded in 1919, was not only “revered” but “used as a model by numerous ethnic groups."

Until he and Bubble Boy Bernie Faber defaced its reverence with their disgusting show of cowardice and blind ambition using the memory of six million Jews slaughtered to further their personal goals and aggressively attempt to squash Canadian's individual freedoms.

[shame on them all. They obviously haven't learned a thing carrying on they way they have the last couple of weeks with their disingenuous attention grabbing press releases to the MSM.]