Guy Walks Into a Kangaroo Court...

Ezra Levant weighs in (in print, not on the telly) on the Guy Earle case and the 'roo who rolled him:


Seriously — there was an argument between a comedian and an audience member at a club, and this pretend judge went into 100 pages of detail, giving the government’s view about everything from where they were sitting, to the brand of beer they were drinking. He investigated whether Pardy was necking or just kissing her girlfriend.

Now, that's funny--in a bleak, black, distinctly Soviet sort of way. One is reminded, in fact, of Milan Kundera's novel, The Joke, which centers on the prosecution of a jokester for saying "rude" and "vulgar" things that the state cannot abide. When I first read it years ago, I never in my wildest imaginings ever dreamt that the censorious thought police would set up shop here in the true north strong and free. Guess the joke's on me--on all of us.

Update: The Hollywood Reporter takes note of the comedic smackdown:


TORONTO -- Canadian comic Guy Earle has been ordered to pay $15,000 to a woman and her same-sex partner after hurling a tirade of “extreme homophobic and sexist” insults at them during a 2007 stand up performance, the British Columbia Human Rights Tribunal has ruled.

Lorna Pardy filed a complaint after she and her partner were seated at a table near a stage at Zesty's Restaurant in Vancouver, even though they did not intend to watch Earle's comedy show.

“They did not heckle or otherwise disrupt the performance, but when Mr. Earle saw Ms. Pardy’s partner give her a kiss, he twice directed virulent insults exclusively at her and others at her table based on her personal characteristics as a woman and a lesbian,” the tribunal’s decision concluded.

The Tribunal concluded that Earle twice left the stage to angrily confront Pardy, only each time to receive a glass of water thrown in his face.

“When Ms. Pardy later went to the washroom to compose herself, Mr. Earle cornered her on her return, continuing to physically intimidate and verbally abuse her. He grabbed and broke her sunglasses, and dropped them to the floor at her feet,” the tribunal chronicled.

In a decision that could chill stand-up comics countrywide, the tribunal rejected Earle’s defense that he has a right to freedom of expression when performing his comedy routines.

“Nothing about Mr. Earle’s asserted purposes in verbally and physically attacking Ms. Pardy on the basis of her sex and sexual orientation justified elevating his right to free expression over her right under the Code to be protected against his discriminatory conduct,” the human rights body wrote in its decision...

Er, what about his "right" to not have Lesbians who are sitting right up front ignore his stage act as they made out and his "right" not to have water thrown in his face--twice? Realizing that this whole laughable "investigation" would have never come to pass has the couple involved been white and straight (even though Earle could have been every bit as "rude," "vulgar," and "insulting"), it seems to me someone's "rights" are sure being "elevated"--which is another form of "discrimination," though a politically correct one. The message here: you're allowed to be an a-hole in Canada--but only if you're a member of certain privileged victim groups.

Update: If  "nothing in the comedian’s routine justified violating Pardy’s Charter-guaranteed protection from discrimination," that is, if a Charter-guaranteed right to be free from "discrimination" (not real "discrimination," of course--being refused a job or a place to live, say, because of who you are--but the kind of "discrimination" that consists of seeing/hearing/reading things that offend you or hurt your all-important "feelings") trumps free speech, then there is something seriously--something horribly--wrong with our sacred (cow of a) Charter. Not that anyone in any Canadian political party would ever have the spine and the stones to say so, and to do something about it.

Update: A still small voice of reason on the Xtra site--a commenter named Snort who breaks ranks with the triumphant:

Pardon my breaking solidarity, but this is an important issue. Pardy's decision to pursue this was a bad one and it's an awful decision by the BCHRT. These types of rulings: a) send a chill b) create homophobia c) are regressive It takes little more than a change in government to tell us that we can't express ourselves in "immoral" ways in public. (Think Buddies in Bad Times, or Pride) If she was concerned with the physical nature of the altercation she could have prosecuted him criminally. If she was concerned about her sunglasses, she could have sued him civilly. Pardy chose the HRT for a reason. The abuse of the HRT by Pardy and the abuse of process by the HRT itself should not be tolerated and must be sanctioned by the community. If we don't stand up for his freedom to offend, we may one day lose our freedom to express ourselves in way that others consider offensive. Just because the HRT favours us now it doesn't mean they always will. A dangerous ruling. Let's hope Pardy loses on appeal.

Right on, Snort! How I wish you were in Parliament. Unlike Official Jews and other "human rights" system boosters, Snort understands how this free speech stuff works--that if you don't defend the speech of those whose speech you despise, at some point you won't be able to speak at all.

Pardy issued a written statement, pointing to the Earle’s attempt to defend himself on YouTube and in media interviews as evidence that he "continues to minimize" the comments that landed him in trouble.

"Mr. Earle’s desire to be a public figure and speak with the media over the past four years has given him the opportunity to portray me as a drunk, heckler and militant lesbian," Pardy wrote.

"I am not only a ‘lesbian,’ but also a daughter, a sister, a partner and a woman in the community at large."

Maybe so, sweetie, but it's the 'lesbian' part of you that got to lodge the complaint witht the sympathetic "human rights" authorities. The rest of your facets merely came along for the ride. 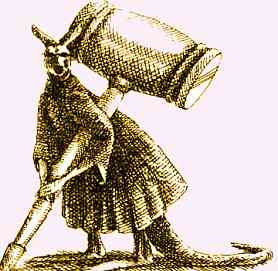 Posted by scaramouche at 7:03 AM