Toronto’s Pride parade began as a strategy in attracting widespread popular support, in a time-honoured, peaceful, way, for gay rights — not only in Canada, but everywhere. As time went by, social acceptance and legal parity became a reality here. The tone of the parade and the surrounding spin-off events then became celebratory for most participants, and a source of vast entertainment for spectators from near and far — not to mention an important source of revenue for Toronto coffers.

That changed some years ago when a rabidly anti-Israel group, Queers Against Israel Apartheid (QuAIA), seized the occasion of the parade to showcase its political hostility, and to cast an ugly shadow over the whole parade. Gay rights activist Martin Gladstone made a documentary of the 2009 parade, called Reclaiming our Pride. In it the hatred on the faces of many QuAIA and D[ykes]AIA marchers is palpable. One saw swastikas on T-shirts characterizing Israel as a Nazi state, and heard menacing chants, like “Fist by fist, blow by blow, apartheid state has got to go.” The film offered persuasive evidence that QuAIA were not ordinary political protesters with specific grievances, but Israel exceptionalists, gripped by an irrational obsession with the Jewish state’s allegedly fathomless evils, while utterly oblivious to horrific human rights abuses elsewhere...

Memo to QuAIA: back in the day a group was gripped by an irrational obsession with Jewry's allegedly fathomless evils. You might want to think about that before donning its symbol.

Update: Do you think a group called Ku Klux Klanners Against Israeli Apartheid (KKKAIA) be allowed to march in the Pride parade? 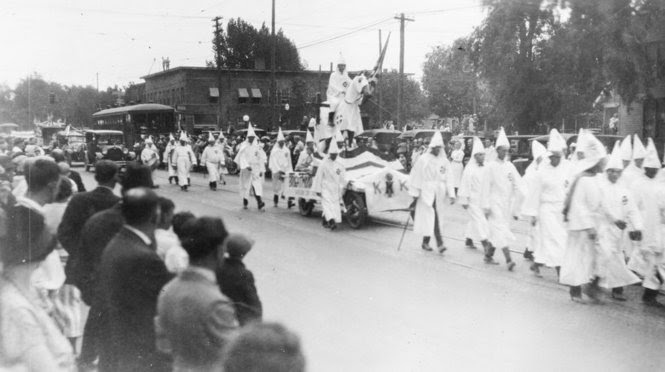 Posted by scaramouche at 7:41 AM

Why should anyone be surprised at the emergence of the Queers Against Israeli Apartheid (QAIA) phenomenon?

The Nazi Party evolved from "blood and soil," often neopagan groups and associations that repudiated Judeo-Christianity, while espousing "butch" homosexuality and pederasty.

The Party itself was born in a Munich tavern, the Bratwurstglöckl, which was a notorious watering hole for butch homosexual bully-boys, the sort from which the early Storm Troopers recruited their street fighters; Ernst Rhöm, their leader, and for a long time the Party's number two, was himself a notorious butch homosexual, as were nearly all of his inner circle. None other than William Shirer, author of _The Rise and Fall of the Third Reich_, noted the prevalence of homosexuals among the early Nazis.

The final ingredient in the QAIA stew is the fascination of Western homosexuals with the hypermasculine sexuality of the Middle East, which often expresses itself in pederasty; remember that T. E. Lawrence (yes, _that_ T. E. Lawrence) largely devotes the introduction to his magnum opus, _The Seven Pillars of Wisdom_, to defending the homosexual proclivities of the Bedouins.

So, again I ask, why should anyone be surprised that QAIA has developed from the "Gay Rights" movement?