My Laugh of the Day: Ceeb Ombudsman Ruling Which Claims That the Mothercorp's Obvious, Purposeful Anti-Harper Bias Is No Such Thing

Perusing the CBC Ombudsman website, I came across this--a complaint made a Ceeb viewer who was upset because, during a leadership debate, the Ceeb kept running the same footage of Prime Minister Harper being cheered by Yids in lids.

The complainant was concerned (and rightly so) that the Ceeb was implying, "Hey, folks--look at who Harper's supporters are: it's the Jooooos!"

Here comes the (unintentionally) funny part (the emphasis is mine):

She told you there was no hidden message in the use of the visuals:


I can reassure you, with no reservations whatsoever, that this was not the case. The visuals came from a campaign event held a couple of days before debate night, featuring Stephen Harper on August 4 in North York at a Conservative Party election rally. The shots used during segments on debate night were chosen at random to show Mr. Harper and the people who came to see him in North York on August 4th. There was no intent to highlight anybody’s religious garb, or focus on any particular group.

She said she appreciated your sensitivity to the issue of racism but hoped that showing pictures of the Prime Minister with any particular group would reinforce the diversity of Canada rather than foster enmity.

Seriously? That's their story? They ran footage of Harper being applauded by very Jewy-looking Jews again and again and again during a leadership debate because they were hoping to "reinforce diversity" and not because they wanted to send a negative message re the ethnicity and implicit Zionism of the prime minister's supporters?

Maybe I'd be willing to buy that--if I didn't already know that the Ceeb is in the grip of pathological Harper Derangement Syndrome coupled with an endemic Zionhass, disorders that afflict far too many ideologues on the Canadian left.

No, I'd say that the yarmulke scene was aired with a specific purpose in mind--and fostering an impression of "diversity" had absolutely nothing to do with it.

Sorry, Ceeb Harper-haters, it's your own enmity that's on display here, even if not one of you weasels is willing to own up to it.

Update: This isn't the first time during the current election campaign that the Ceeb has singled out something Jewish. Courtesy Honest Reporting Canada, here's another recent instance, and it makes the Ceeb Ombudsman ruling look even more disingenuous/full o' crapola.

Update: I'd be more inclined to believe the Ceeb ombudschick's cock-and-bull ruling had her employer chosen to run these "random" images of Justin Trudeau on continuous loop during the same leadership debate: 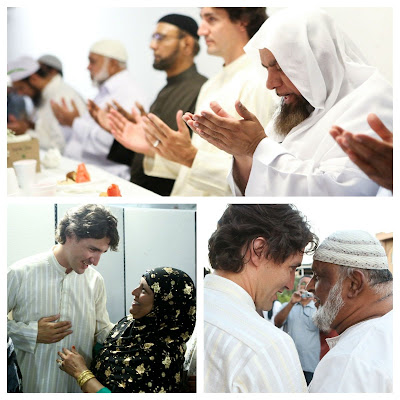 Posted by scaramouche at 9:00 AM